Stage 1 of the competition began in December 2016 with a Request for Supplier Qualifications, open to both national and international teams who partnered with locally licensed architects. Build Toronto received a strong response from high-caliber, award-winning and internationally recognized architects and landscape architects who demonstrated their passion for City Building. Based on the merits of the letters of interest, team composition, resumes and previous work experience, Build Toronto had the difficult task of shortlisting five teams to move forward to Stage 2 of the competition, selecting from a great number of exemplar and innovative submissions.

Following the public presentation, the five-member jury deliberated to select a winning team based on the merits of:

With these merits and the submission of community comments after the public presentation, the five-member jury selected Adamson Associates Architects, Henning Larsen Architects and PMA Landscape Architects as the winning team and made the recommendation for this proposal based on its ability to meet four key concepts:

The design team focused on microclimates and created a structure that would combat Toronto’s cold climate 60 per cent of the year by strategically positioning its series of building squares to block out winds. This creates the possibility of having 30-50 extra days a year of outdoor comfort.

With the completion of the design competition, following City Council direction, Build Toronto will undertake a business case analysis that will closely examine the merits of a new build versus ongoing maintenance and operation of the existing civic centre. The business case will be presented to Council in fall 2017.

Photos of the winning design: 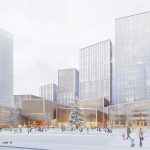