On October 1st, Mayor John Tory officially opened Garrison Crossing to the public – including pedestrians, cyclists, dog walkers, stroller pushers and snakes (yes, one of the first to cross the bridge was a cyclist whose pet snake, Mocha, joined him on his bike!)

The Mayor officially opened Garrison Crossing with local Councillors Joe Cressy and Mike Layton and representatives from the City of Toronto, CreateTO and Dufferin Construction Company.

The development of the bridge, led by CreateTO on behalf of the City, is an example of City building at its best, fostering stronger community networks in and around the city. For anyone wanting to walk across the bridge, it can be accessed on Wellington St. West and through the Fort York grounds. 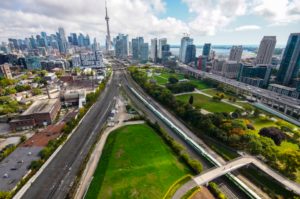